A Whole Lake of Thinking 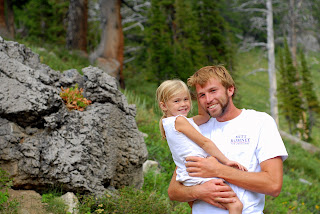 Well. These last weeks have been full of good times with the family, beauty time at the lake, and me thinking myself to death. I have thought so much about life and what do in the last little while, it's actually quite taken me by surprise. I am usually a pretty laid back guy, and not to say I have been crazy or antsy or anything, just that I didn't realize how intensly I could think about life. Not sure if that made sense...let me put it simply...this is a tough decision. 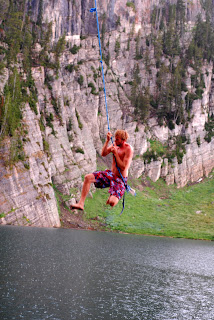 Trips to Bloomington Lake with my awesome little neices and nephews, and great talks with my siblings have parents have lightened the burden a lot. But it is just one of those things, that no matter how much you talk to others, when it comes down to it...you yourself have to make that decision. So I am learning that. And the ropeswing is back up at Bloomington after going on hiatus for a period of time. 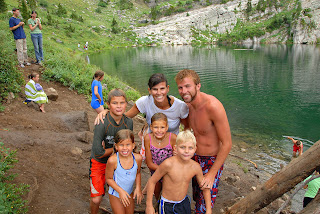 This is all of us who went on the swing... Kristi took the picture, and afterward she went as well, in her clothes. I thought she was going to freeze to death, but she made it out alright. So the other day I had a great talk on the phone with Spencer Zwick, who is the head of fundraising on Mitt's campaign. We talked and he proposed the idea of me working on the campaign... (big surprise) no what I mean is, the campaign is really working hard to get fundraising going at a more grassroots level...instead of the the richies giving all the money, they are trying to really get it coming in from all levels. So at the end of September, in Salt Lake at the Salt Palace they are having a huge call day (like the one mom and I did in Boston) but with 2500+ people there. Each person being a community captain of sorts, who by themselves, or with a team of a couple of people has commited to raise $1000 that day. So bringing in around 3 million in that one day. Once they see it can be successful here in Utah, they will expand in the next quarter to other states. 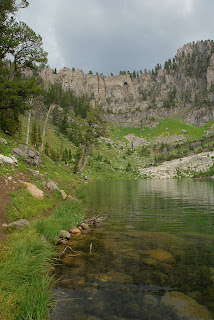 So you're thinking, ok, where do you fit in Eli? Well they have the heads of Finace and fundraising for Utah being the chairs of the event, but they need 3 or 4 full time staffers to work out of Salt Lake for the next 7 weeks coordinating the event, getting people excited and committed to it, and actually making things happen. So he asked me to be one of those people. So for the firt bit I would be in Salt Lick and then move on to Boston afterward, hopefully with a good reputation after having a good showing at this fund raiser. If for some reason I am really not feeling it at that point I can move on to something else. So it seems to me to be the perfect opportunity. The more I think about it, the more into it and excited I am. I just sent an email to Spencer telling him that I am excited about the idea, he is going to send me a formal offer, and assuming it is all good and right, that's what I will be doing. Living with Tal in NYC is extremely intriguing and hard to look past, but I have a feeling we'll be there together before too long. By January, or November when Mitt gets elected. So give me a shout, let me know what you think. I sure love you all. 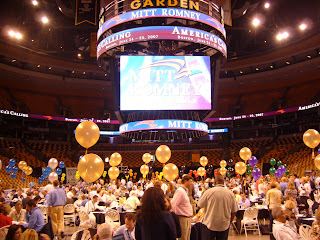 As most of you have heard, I had the chance to go back to Boston with Mom for this Mitt Romney Fundraiser last week. It turned out quite nice as I am thinking about going back to work on the campaign. This gave me the chance to get up close and personal and see what this is all about. I really liked the feeling there (and the chance to go the Fenway and the Garden). I don't like politics too much, but to work on a Presidential campaign, especially when it is someone who holds the same values as me, is once in a lifetime, not to mention a good resume builder. 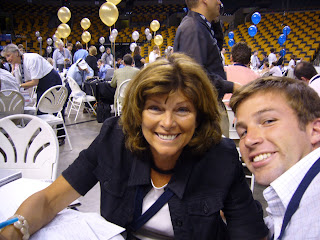 So Mom and I made calls from the floor of the Boston Garden with a goal to raise $10,000 between us. It was a little awkward calling people and asking for money, but after 6 or 7 hours, we made our goal! Largely because of Dad, he was calling people from SLC and then calling me, and I would fill out the donor sheets as I talked to him. So we raised a lot of money, and it made it look like I was doing something worthwhile, other than calling friends for 10 and 20 dollar donations. 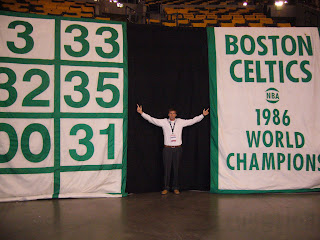 They even had these banners down. #33 that's Larry Bird. #00 the chief, Robert Parish. 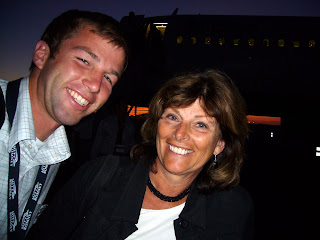 Here we are standing outside the chartered JetBlue plane on the tarmack at the private airport in Salt Lake. That was pretty cool. So anyway, I am feeling pretty good about the prospect of going to work on the campaign. I fasted about it yesterday and have yet to receive a stupor of thought, so assuming I can actually get a job, I think I am going to go for it. Work there in Boston until the campaign ends, and then see what happens from there, maybe migrate down to the Big Apple because as you all know, that is one place I just have to live. I am excited to see you all at the reunion! Keep reading down for some pics of Fenway!

Fenway Pahk! (say it with a bostonian accent) 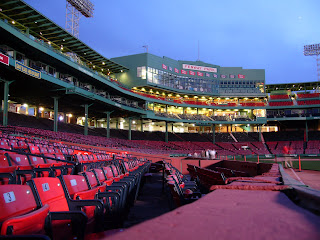 How bout that lighting. 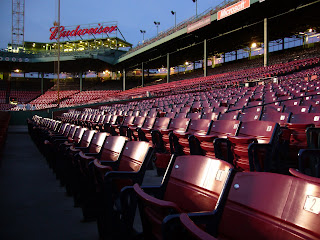 You can see the history right in these seats. 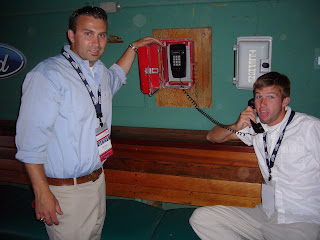 Terry Francona uses this phone to call the bullpen to bring Papelbon in. 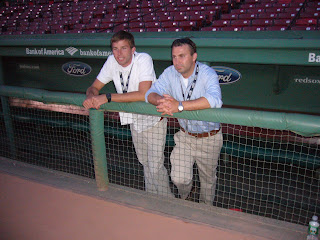 This is where the famous pitchers stand. (in this exact same stance as they look out of Boston's dugout) 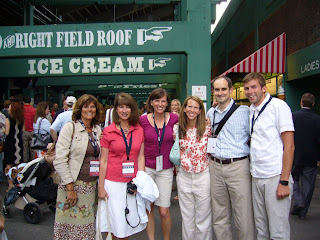 It is the dream of every Red Sox fan to walk on the field at Fenway. There is something magical about Fenway. Being in there and walking around, the whole stadium empty. Thinking of all the great players that had been there. Babe Ruth, Ted Williams, Big Papi, Manny Ramirez, Pedro Martinez, Wade Boggs, The Rocket. It was pretty dang cool. 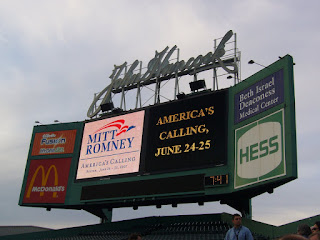 I wish that guy would have moved, but he was pretty set in his ways there. 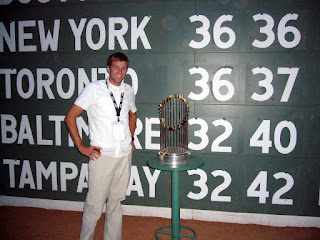 This is the 2004 World Series Trophy. The one that broke the curse of the Bambino. They had it out there on the field, just for us to take pictures with. Someone has some connections. 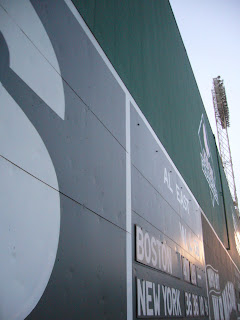 This right here is the Green Monster. If you don't know what that is, well I am sorry. It is the left field wall at Fenway. And it was made out of tin. I am sorry for all those who have smashed into it trying to catch a fly ball.