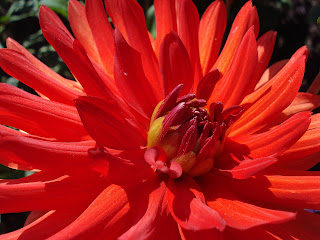 This is a nice flower don't you think... I quite like it. Life is good right now. I am going full time on the campaign...I really like it so far, it is pretty intense, but quite awesome to be a part of such a great thing. Mitt won in Ames and has some good momentum going. One of my best friends, Parley is working alongside with me, and that makes it a lot of fun. We are going for 2500 people maybe up to 3000 there to raise money $3 million on the 28th of September. We have a lot of good stuff going and a lot of great people working, so it is definintely possible.
Me, Tal and Char had an awesome trip up to Logan last night and today. We took Grandma out to dinner and had a great night talking and hearing stories. Tal recorded a lot of it, so if you would like to listen let us know. My favorite part was last night...I got Grandma's record player going and pulled out all of her old records. I want to get a record player now. The old fashioned music, the old fashioned sound... I just love it. It was fun for Grandma to recall her memories as we listened. The best part was when she said, "I can close my eyes and see Dean there dancing with me, and I know exactly what move he is going to do next." That one really hit me. What an incredible woman Grandma is. We also spent some time with Melva Stiles (a famous singer who dad met in NYC on his mission who also sang at mom and dad's wedding, she was there visiting grandma) And EmmaRae, Vern's wife. They just told us all sorts of good stuff. We went to Church with Gram today and then headed down and met up with Mom and Dad and spoke with them at a big fireside in Bountiful. Like 20 stakes of single adults, about 1,000 people there. Mom and Dad had me and Tal and Char take some time and speak as well. It was really cool. There was a great spirit there...Mom and Dad are amazing speakers, they are able to appeal to anyone, even young singles. Dad was bringing the house down with hilarious stories about his decision to marry mom and mom brought a special spirit as she talked about getting out of the world and serving others. I also met a beautful girl there I hope to be able to take out.
So it has been an action packed couple of weeks. Read below for pics and info about Char and my trip to LA last weekend. I love you guys. 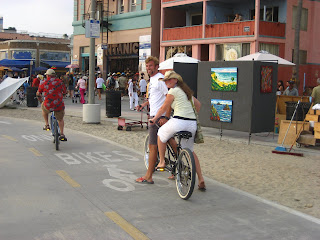 Hey all. You like the song don't you? I sure do. It is from the movie Once that just came out.
It is a movie from the UK that won some stuff at the Sundance Festival. I haven't seen the movie, but is the lead actor and actress singing this song. So as you may have heard, I got to go on a nice roadie with my best little sister down to SoCal to see our good friend Lisa. It was so awesome. SoCal is just a great place. From the beaches, to the museums, to Hollywood, all that good stuff. This top pic is of us on a tandem beach riding from Santa Monica beach down to Venice beach (crazy people land). 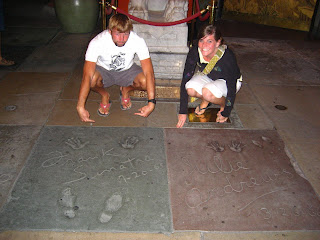 Here is me and Char in Hollywood. In front of the Chinese theatre...with Julie Andrews and my main man Frank Sinatra. I am liking that guy more and more. I can't wait to hear him sing in heavan one day. He is awesome. So simple itinerarie. We drove for what seemed like ages, w/ nice rest stops in Vegas at In and Out Then to the border of Cali/Nevada and a ride on the rolller coaster at Buffalo Bills. It was sweet. Next day, to the beach...Malibu beach, then to Santa Monica and bike ride, then to 3rd Street in Santa Monica (street performers galore). Saw some crazy stuff. Then went up to Hollywood. On Sunday we went to church with Lisa and her sweet fam, had some food with them and then went to the Getty. The sweetest museum I have seen on this side of the US (one of my new favorites in the world) Atop a mountain overlooking LA. The architecture was amazing, the gardens, and the art. Not too much, just a couple from the major artist, but it was quite impressive. They had an awesome Photography exhibit on as well. That night...to the beach in Malibu for a picnic behind all the insanely large houses. 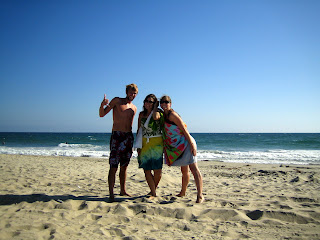 The next day we went to the Ronald Reagan Library, saw the actual Air Force One and learned a lot about Reagan. He was an awesome man...his wife too. Then to Huntingon Beach to Tal's stomping grounds. Hung out there on the beach, then to Anaheim for the Red Sox game...It was Awesome!! The sox lost, but anytime you get to see the two best teams in Baseball go head to head, it is a pretty good game. 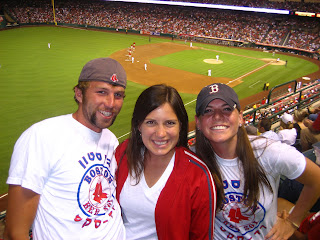 Then we hit the road and drove for another 78 hours and got home. With a stop in St. George to say hello. It was quite a trip and it was so awesome to spend some good quality time with my sis. She is the greatest. So much going on for that girl...it was great to talk and get advice, and just enjoy ourselves...and wear matching Red Sox shirts from Israel at the game. More pics below. Notice the slide show on the right of a bunch more pics. I think I want to live in SoCal for a while some day.

The Getty. The temple. The beach in Malibu. I think I want to live in Southern California one day. Those beaches. The ocean. The waves. The temple as a beacon over LA. The Red Sox. Hollywood. Huntington Beach. The Ronald Reagan Library. They just have a lot of great stuff in that neck of the wood. No wonder Tal liked it there so much. Best of all I was with Char. We had such an awesome time.