Colors and our first visitors. 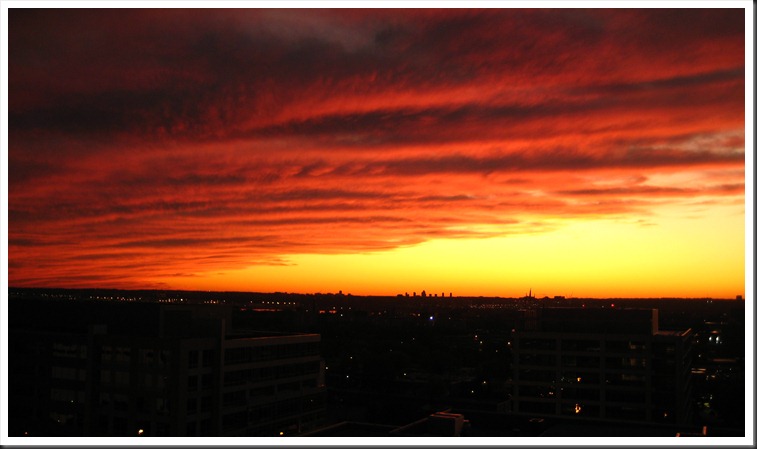 Whoa huh? This was the sunset tonight. I got up there a bit late, but it was one of those nights where the whole sky 360 degrees was pink and red and orange. So how are you doing? Life is good here in DC. It is so so so beautiful right now. Leaves on fire wherever you look. There have been some terrential downpours, but other than that, the fall weather has been fantastic. Julie finished school! The school part (going to class) of her semester is now done. So she has taken her last tests and gone to her last classes of college!!!!! Wahoo. Now, for the next 7 weeks she’ll be in the hospital working side by side with a preceptor (like a mentor nurse) and then she’ll be done! She’ll be an RN before we know it. So that is pretty exciting. She works 7am-7pm shifts yesterday and today (sat. and sun.) and has to do the same thing tomorrow. But such is life as a nurse I guess. She is loving it so for thought and really learning a lot. She seems to be working with a great preceptor and she’ll be learning a lot. This preceptorship is at a hospital in Arlington.

So last weekend my mom and dad came in town. Other than the fact that it didn’t stop raining the whole time they were here, we had a great time. Dad is reading The Lost Symbol by Dan Brown right now so we went on a tour of the Capitol, went to the Library of Congress, took a trip out to McLean to check up on Mom and Dad’s house there, ate some wicked good food, went to the East Gallery at the Smithsonian (modern), and they got to come to church with us. It was so fun to have some time with just the 4 of us and reminisce about their time here when they were about our age.

Here’s some pics from the good times. 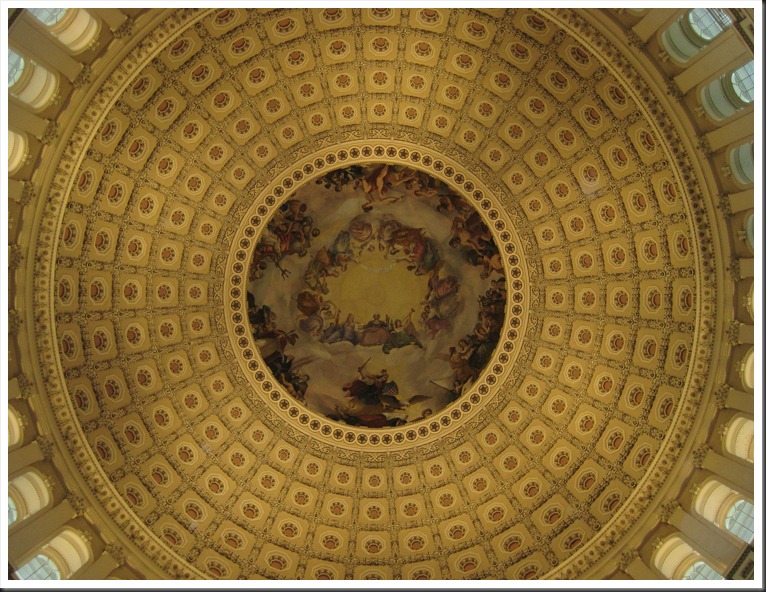 The Rotunda. Dan Brown will tell you a thing or two about this painting. Hmm. 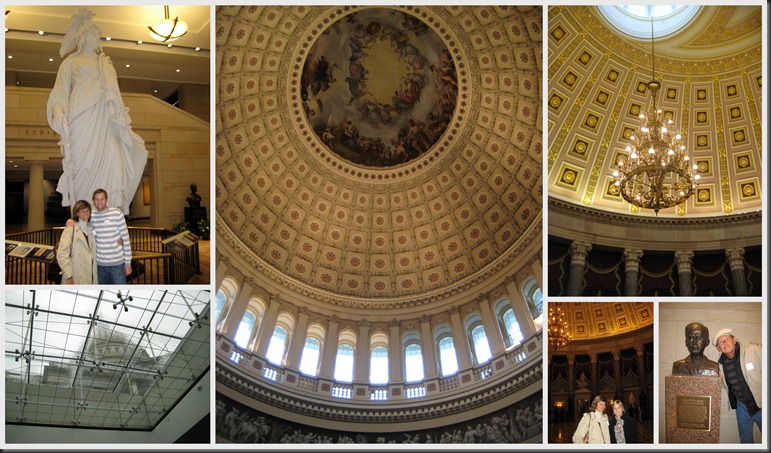 Capitol tour. There is this beautiful new $700 million Capitol Vistor’s Center that is underground in front of the Capitol. It has been under construction forever, and wow, it is really cool. That building is amazing, it really makes you appreciate it more as there are exhibits that go through the history and majesty of the building. It was the first time I have been in there since I was an intern for Senator Hatch 4 years ago. The tourguide wasn’t near as exciting as I was when I was an intern (you see, I liked to keeps things interesting by mixing fact and fiction here and there), but it is always an awe inspiring thing to walk through there and to think about how lucky we are to live in such an amazing country…I think we all complain a little too easily lately. Ya, the economy’s rough, but man, this is an incredible country. 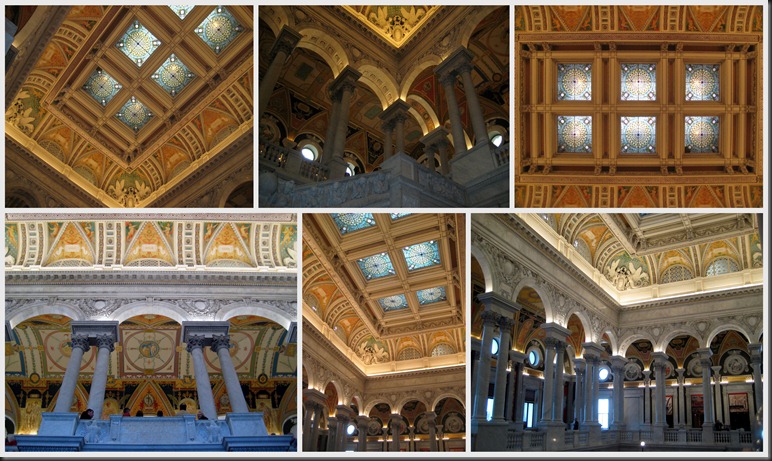 There’s a convenient tunnel between the Capitol and the Library of Congress. Holy Cow this building is amazing. DC has some truly amazing architecture, but the interior of this place might take the cake. I didn’t take a picture of the main reading room, which is SO beauty. Julie and I are excited to get library cards so that we can go in the main reading room. 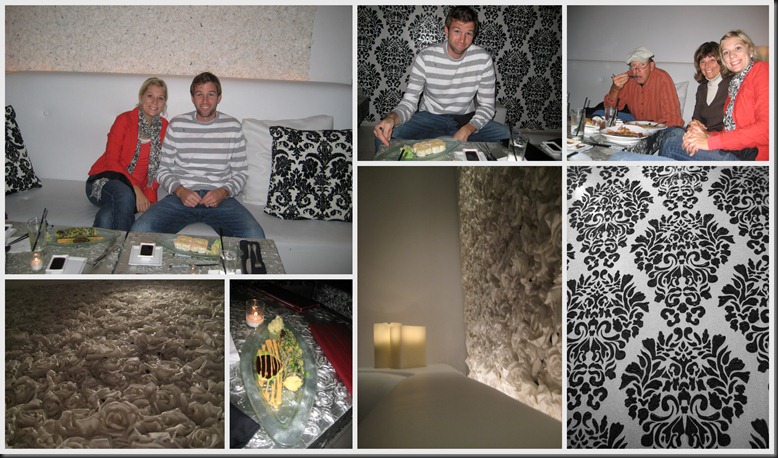 Sorry for all the collages, they are just a lot faster and easier. Food. This was one of the awesome restaurants that we ate at. This was French-Asian Fusion Restaurant. So Cool. I wish I had some more pics of the inside, like the 15 foot long fireplace/inset into the wall with the strip of fire coming out of the crystals. Those are roses on the wall. Really cool place. Come out and we’ll go there again, you’ll love it. We sat on couch/lounge chair things and just enjoyed some good food.

Mom and Dad got to come to church with us too and meet some of our new friends, and see how interesting the ward here is. It was so fun to have these guys here as our first visitors. 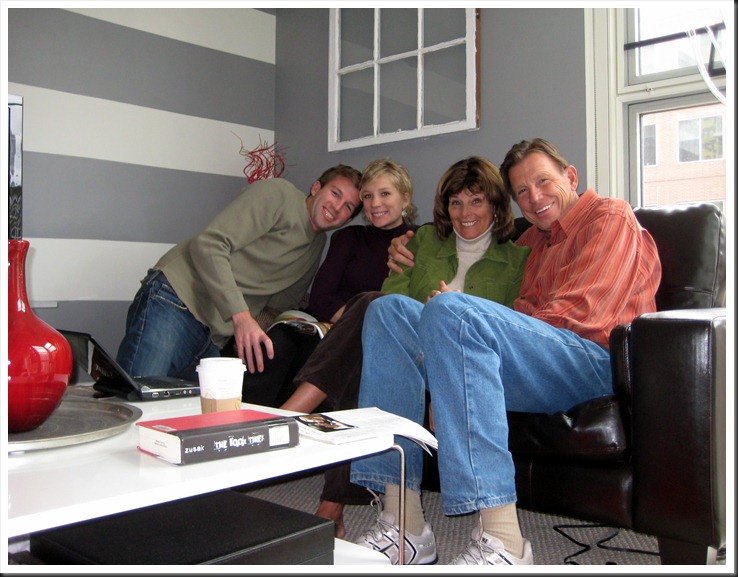 Like I said, it is full on autumn here and oh so pretty. Here is a pic as I walked home from church today. 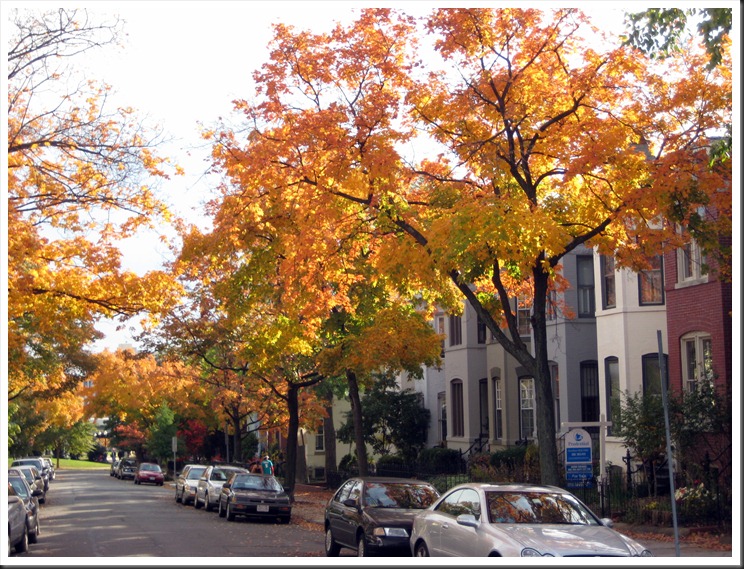 And one last thing. Opening night is Wednesday!!!!

Dwill and Dwight from The Office

I am getting so excited for the Jazz! This commercial just got me that much more excited. The Jazz will be flying under the radar once again this season... and assuming the Jazz got all of their injuries for the next 10 years taken care of last year, around January everyone will be jumping on the bandwagon.
Posted by Eli at 7:46 AM No comments:

I just found this band. You might think it is weird, but I love the electronic sound. Go on my actual blog page if you are reading this is a RSS feed reader. The first four tracks are Owl City. I'll put more that I like on as I listen a little more.

It's like The Postal Service 2.0... a little different, maybe a little more catchy. Here's the bio. Interesting story.

Owl City is the electronic brainchild of Adam Young, who launched the project in 2007 while living at his parents' home in Owatonna, MN. Troubled by insomnia, Young began spending his evenings in the household basement, where a computer and several instruments provided a welcome diversion from his sleeping patterns. He eventually combined those diversions into a blend of electronica and emo-pop, using little more than his computer and various keyboards to record the material. Songs were uploaded to MySpace upon completion, and Young began attracting a surprising amount of attention on the networking site. Of particular note was "Hello Seattle," a fabricated ode to the Emerald City whose viral popularity earned Young a record contract with Universal Republic. Ocean Eyes, his debut release for the label, arrived in 2009, coinciding with Owl City's first national tour.

Fall is quite nice here in DC. The weather seems just about perfect every day – mid 70’s with a nice little breeze. Hopefully this keeps going on for a while. It has been an awesome conference weekend. We sat on the lawn next the Capitol and listened to a session on the iphone radio app. Enjoyed the others streaming on the internet here at home, and went to Priesthood at the church. Our ward here is awesome. We meet in an old Safeway (grocery store) building (converted into a church) near the Capitol. There are so many great people that we’ve met and we’re excited to get to know them and do whatever we can to help make the ward stronger. There’s a mix of lawyers, state dept., FBI, Dept. of Defense, Capitol Hillers, Grad students… all sorts of interesting people.

I’ve got to say one of my favorite parts about DC are the neighborhoods. There are so many different parts of the city that are all so unique in their own way. It has been a lot of fun as Julie and I have gone out and explored the various and we’ve barely cracked the surface. The other favorite part is how close we are to the mall and the museums and all the fun stuff going on there. We’re getting pretty excited for the fall leaves here. There are more trees in 10 square miles here that there are in the entire states of Nevada and AZ. I’m sure I will be posting some of those pics.

The least favorite part so far in the traffic and the roads. Whoever designed DC had some serious issues. I’ve heard that they were trying to make it hard for intruders to attack the Capitol. If that is the case, they did a heck of a job. The roads make no sense and they are always packed. Feels good to drive 7.3 miles in 90 minutes.

It’s exciting to be here with Jules on our own, blazing our own pathway. Julie has 2 weeks of school left at George Mason, then her Preceptorship at a hospital in VA, and then….Drumroll….she’ll finally be done!!!!!! In January she’ll take the NCLEX and become at RN. She’s going to be the most incredible nurse! I am so excited for all of the patient’s whose lives she’ll bless.

Here’s a few pics as of late: 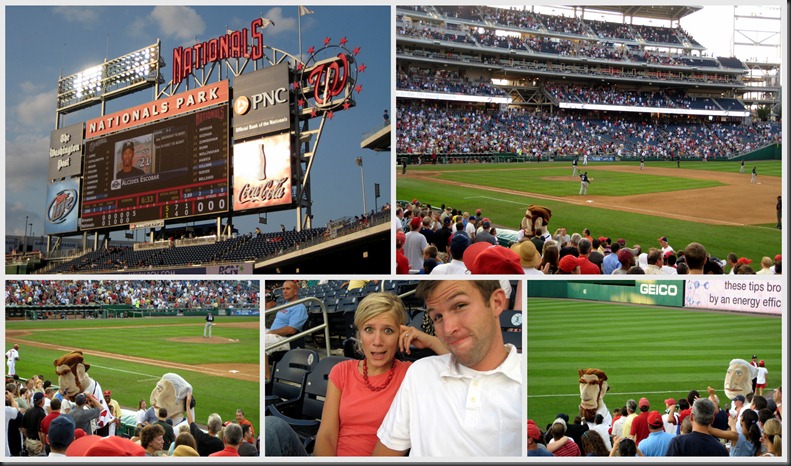 We live just a couple blocks from Nationals Park. Now, the Nats aren’t good per se, but nothing like catching a few innings of a big league game once a week or so. Watch out next year! The Nats finished on a 7 game win streak, and they have awesome mascots at the game. 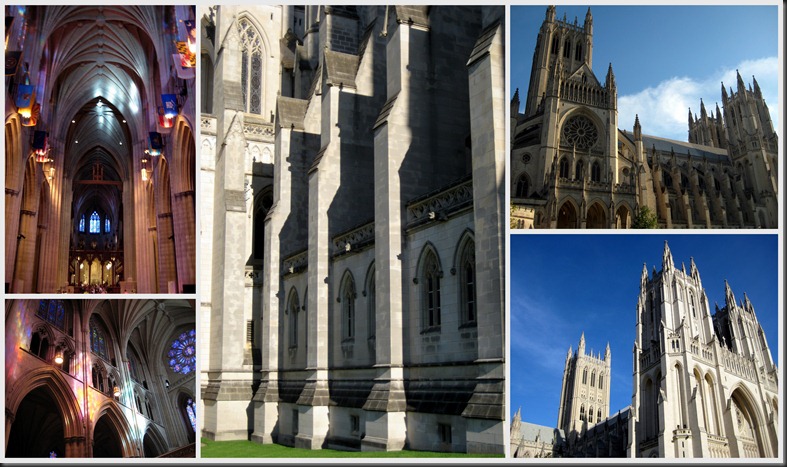 Then we went to Europe. It was so beautiful. Just kidding, this is the National Cathedral, and though it is brand new in comparison to cathedrals in Europe. It is beautiful, and has the same beauty and touch of Westminster or some of the European cathedrals I’ve been to. We went to Evensong there which was really cool. They were instating some new members of the cathedral hierarchy so we got to see that ceremony too. Interesting. 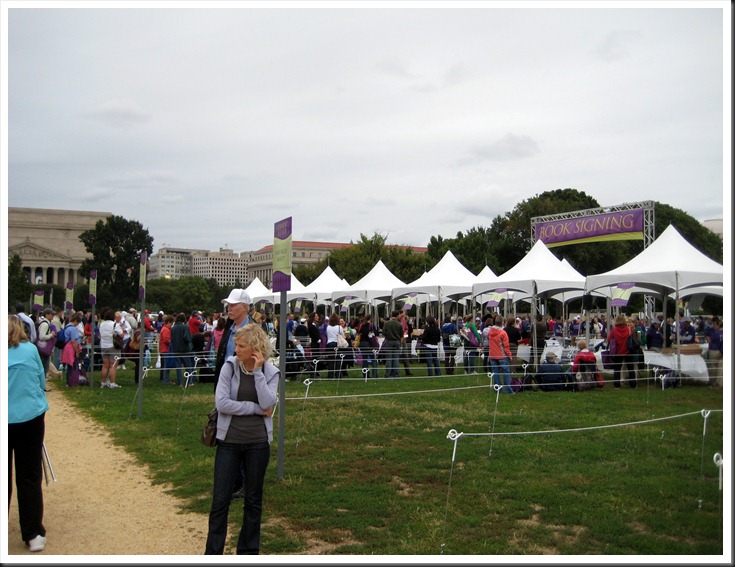 We went to the National Book Festival on the mall, 150,000 people and like 500 famous authors or something like that. Pretty cool to see that many people getting that excited about books. There were a bunch of speakers (authors) and then book signings. Even John Grisham was there. 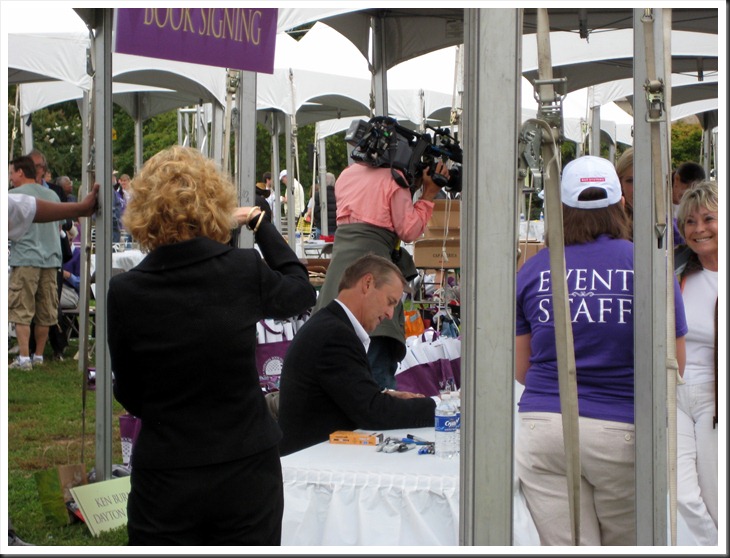 Lots more pics coming soon. I promise we’ll put some of our apartment up soon too. It has taken us a lot longer than we had hoped to furnish the place. This week, I talked Julie into one of the most important investments for our place… (it is though, i mean, we went through our budget and planning and stuff on it today as it was hooked up to my computer). 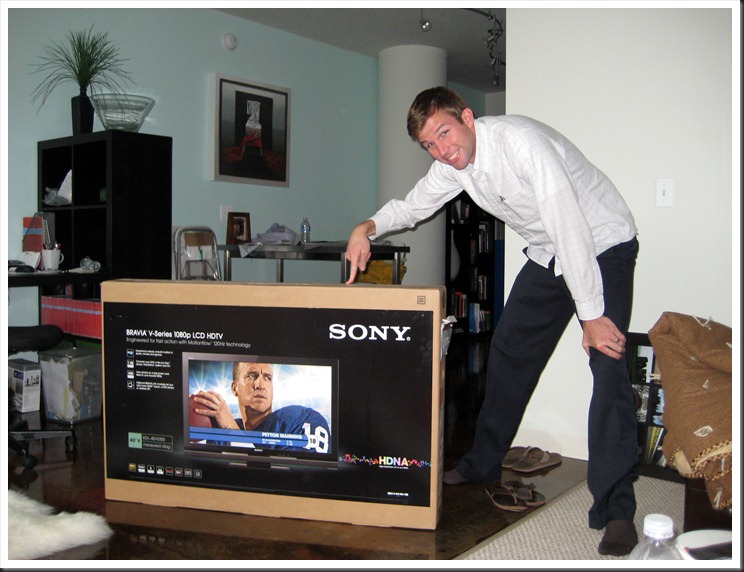 As the first of the tour of our apartment. Here is the view from the roof. 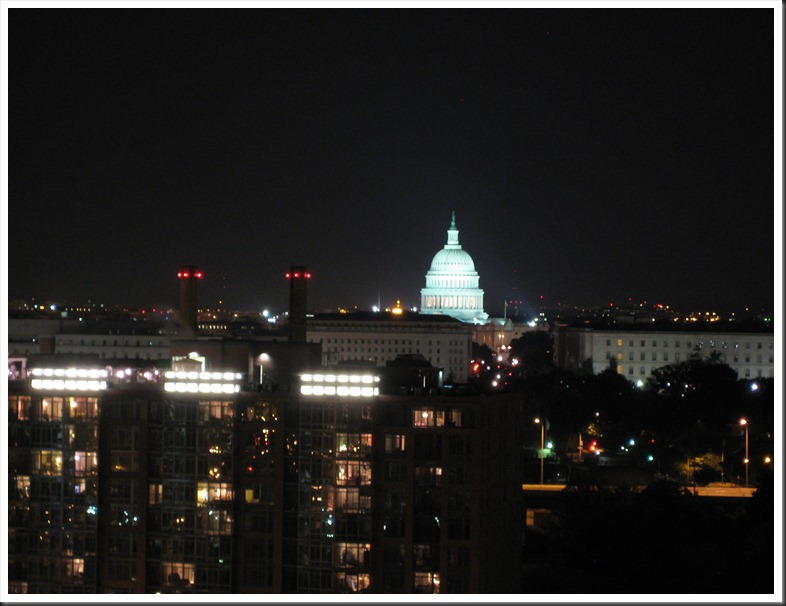 and the other direction… 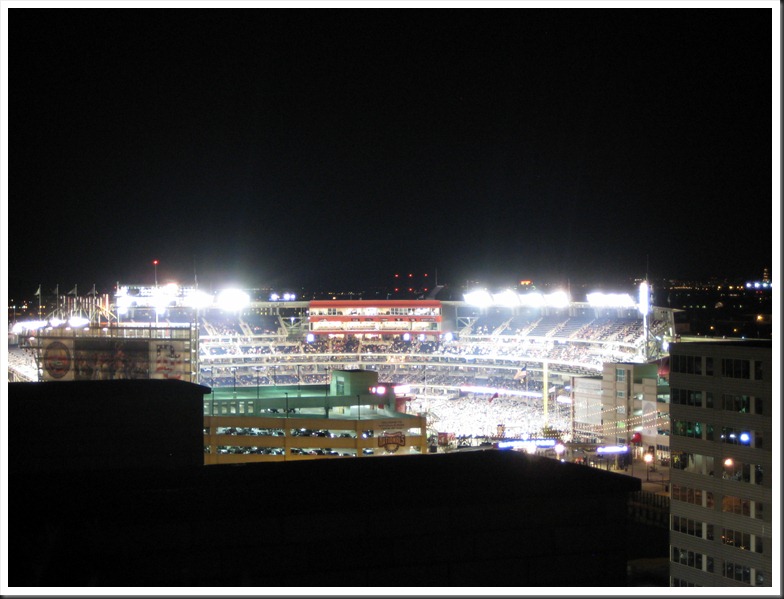