The East Coast at Christmastime

Well, here comes the ultimate in blogging. Mobile Blogging. It doesn't get much more amazing. Except for the fact that the camera on my phone isn't the greatest, but I couldn't find my memory card for the camera I have been borrowing from Jo and Aja so this was the next best thing. I kind of just popped my phone out and took a picture whenever I saw something interesting. So here it is.

Hail to Fenway. It was awesome to drive past the home of the champs as we were on our way out from the airport to see Charity at Wellesley. You gotta love Fenway.

Lake Waban on the Wellesley Campus. It kind of sounds like someone tried to name it Lake Robin, but they couldn't say their Rs. It was so beautiful. it was freezing cold, but I tell you what that is an incredible campus. The lake was just freezing over, but the ice was really clear so you could see down in. I also discovered a really cool sound that Dad, Char and Mom can attest to. If you throw a rock, like you are trying to skip it on the ice, it makes the coolest echoing noise. So next time you are near a newly frozen pond or lake, please give it a shot. This is right where Charity opened her mission call so it was really cool to be there with her.

The Temple! What a beauty. Last time I was there this temple didn't yet have a spire and Angel Moroni on it as it took the campaign a while to get approval on it. What a beautiful place. It was so awesome to be there with Charity as she went through for the first time. That was a special opportunity...that I will not soon forget. What an awesome girl Char is and what an incredible missionary she is going to be. It was great to be there with Mom, Dad, Saydi, Jeff, Jo, and Aja as well. We had the whole session to ourselves. Which was special as well. We went into Belmont and had some beauty Indian Food, then Char and I ventured off into the city for some freezing good times. Holy Cow it was cold there, my eyeballs hurt it was so cold. We walked around through Boston, saw the Christmas lights, enjoyed the season and then capped it off with a trip to a sweet Jazz club. It was great to be in the city with Charity and have her show me all around. 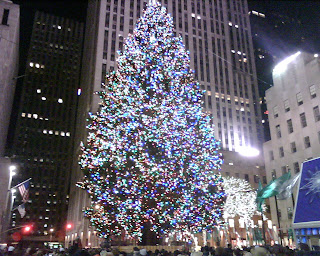 Boom. Then the next day it was on to the city I love the most. New York and Christmas. Wow. It was awesome. We went to the temple there with Noah, Kristi, Mom, Dad, Tal, Sarah, Charity and I and yet another amazing experience. You guys really are incredible examples, it was so cool to be there with you. That night we went to an awesome Sushi restaurant right by Noah's place then ventured off into the city. A walk down 5th Avenue to see all the Christmas decorations and to have a look at the beautiful tree there at Rockafeller Center. 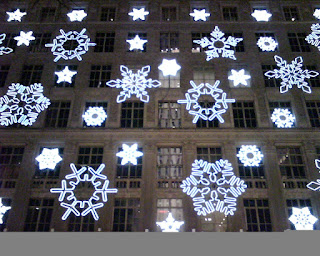 Saks 5th Ave. Right across from Rockefeller there is this awesome display these snowflakes all over the building light up according to the beat as Carol of the Bells plays. That is one of my favorite Christmas things I have seen. The music is nice and loud and there are thousands of people there enjoying the Christmas spirit.

From there we headed down to Bryant Park for a potential ice skating experience, but we got there just as they were closing. Gotta love that feeling, we tried every way to get out there and get some skates, including Noah pretending like he was ice skating in his shoes to sneak over and get us some skates. That didn't work either. Nonetheless it was beauty. Check out the tree there and the Empire State lit up blue for Hanukkah in the background. 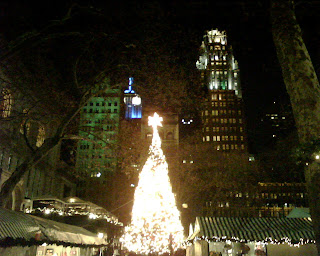 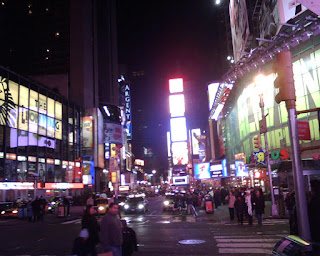 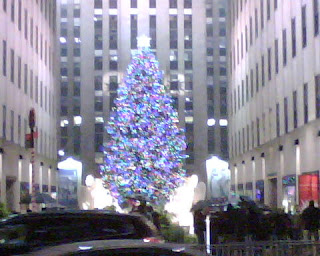 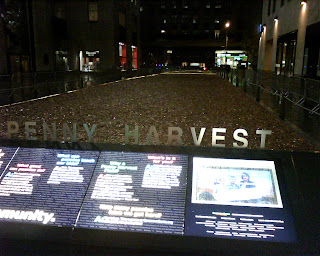 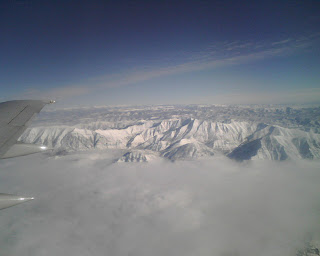 I can't get this to format so I have to write about these others down here. The next night (Sunday) Me, Tal, Sarah, Jo, and Aja ventured down to St. Patrick's (big cathedral) on 5th, which was beautiful, we then went up to Columbia and caught the end of the Columbia Orchestra's concert which was awesome. We then went over to Sarah's and had some hot cocoa (Sarah is awesome by the way, for those of you who haven't met her). Then we parted ways. I slept for an hour and a half then left for the airport at 2 am as my flight was at 5 and the subways were running local. This last picture was right as we were flying into Salt Lake, it was really cool, totally sunny and beauty where we were with the mountaintops, but then we flew down into the clouds and snow below. It looked really cool.

Oh, and the pennies. Supposedly one hundred million pennies there on spread across the block there near Rockefeller Center. All gathered by kids all over the place for Charity. It is supposedly a million dollars worth for Charity. Pretty cool sight I must admit. Gotta love the random stuff you see in NYC.

Life is good. Things are crazy with Mitt. It is crunch time. I gotta say I love the Holidays! Julie and I are going to the MoTab Christmas Concert tonight with the King Singers. I am headed down to St. George this weekend to do some call days down there, and then we are going to Mexico next week. I can't wait. I am not going to see Julie for a couple weeks which I am pretty sure is going to be rough. I will see what I can do though. Merry Christmas to all.
Posted by Eli at 11:26 AM 4 comments:

In all the commotion and excitement of Christmas, I've been trying to think a lot about this place. Bethlehem. 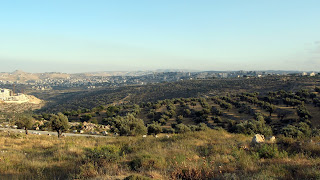 Bethlehem. These are the fields in which the shephards saw the star. 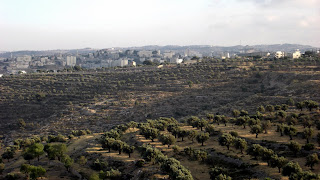 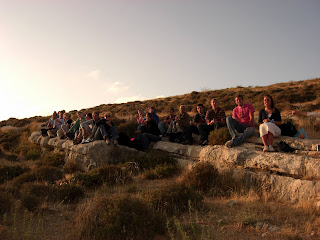 What a place. What an oppotunity to actually go there this year.

The Most Wonderful Time of the Year

You all know how much I love Christmas. 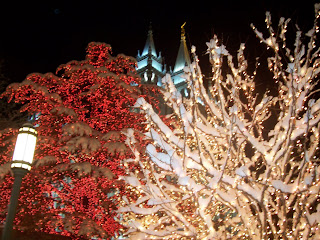 I can't tell you how excited I was to wake up on Saturday to a fresh blanket of snow. Then is just kept going all day and provided for an absolutely beautiful winter wonderland capped off by a beauty trip to Temple Square and to get a tree. I just love this time of year. People change, there is just a different feeling in the air, everyone listens to the same great music, and most important, we get to go back 2000 years to that night in Bethlehem. That has taken on a whole new light for me this year as I have had the chance to actually go to Bethlehem in the last year. Wow. What an experience that was and I am excited to have many chances to reflect back on that this season. Temple square is as beautful as ever, I love walking around down there at Christmas. 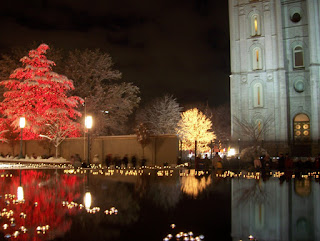 The place was rammed with people from all over the world. I heard about 5 different languages as I walked around. Tourists and locals, LDS and non-LDS everyone there together enjoying the beauty of Temple Square. I walked past one group of tourists who were just dumbfounded by the lights. They kept saying, "it just looks like daylight under this tree" in total amazement. Props to the guys who put up all those lights, cause after putting lights on one tree I am ready for a nice long break. 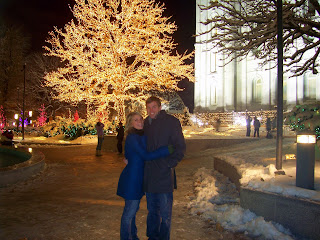 So being there with Julie made it that much better. I think she is a littel shocked at how excited I am about Christmas, but that is just who I am. So we had a nice walk around and then went up and met Mom and Dad at the Christmas tree lot and found a beauty. Shopping for trees with Dad is pretty funny, it was cold out so every tree we looked at, he would just say "that is the most beautiful tree I have ever seen, let's buy it" You all know how awesome Dad is in those situations. So we bought one on impulse but it turns out to be quite a beauty. 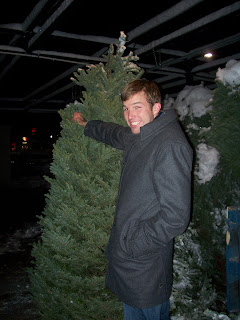 I don't think i've been so busy in my life before. I get up, go to work for ridiculous hours (anything for Mitt right?) hang out with Julie for a while or come home and think for 20 minutes, go to bed and get up and do it again the next day. Crykee. I am excited for Jan. 3 (the Iowa Caucus) when we'll find out whether or not all of this was worth it. I should be greatful though, I got a job and it is a pretty incredible experience minus having to work through people that are wicked slow cause they have so much else on their plates. Oh well though. That's just life. I am really excited to go back East this weekend. To go through the temple with Char and to see the greatest city on earth at Christmastime. Oh baby.