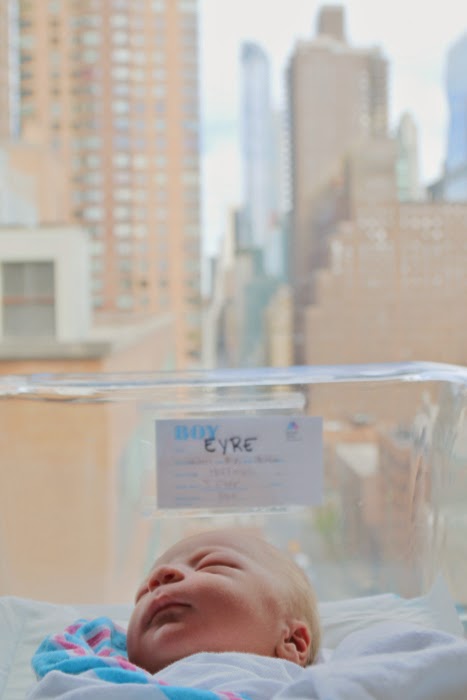 We brought Dean home from the hospital on Sunday and Zara was sure excited to have her little brother here to show him the ropes. We love this little guy.  What a namesake he has on both sides of the family! He has an incredibly calm demeanor and just seems really happy. He has a nice set of lungs as well. Read on for the crazy awesome birth story, more on his name, and some more photos below.

the story:
Baby's due date came and went on the 21st. We enjoyed some some awesome days in the city with mom and dad while we waited for him to come. Julie started having some contractions about 5:30pm on Friday night, though we weren't sure if they were real. They started coming a little more regularly (4 to 5 minutes apart) so she called the midwife at 6:30. The midwife told her to sit down and monitor her contractions and call when she couldn't talk through them anymore. When it got to that point at around 7, she called the midwife again who told her it was time to come in. Julie said we would put Zara down for the night, but the midwife said there wasn't time for that and should be on our way.

Our neighbor came over to help put Zara down and we headed down the stairs and jumped in a cab (it was 7:15-7:20 at this point). We had to make a stop on Broadway to pick up out Doula on the way to the hospital. Unfortunately, we got the wussiest taxi driver of all time and he was super nervous about the fact that there was a woman in labor in his cab. I asked him if he'd ever driven a woman in labor before when we first got in and be kind of laughed and said no. When I told him I was serious he got quite nervous. He wouldn't drive aggressively at all. I was ready to kick him out of the taxi and drive the rest of the way. He was convinced Broadway would be faster than another street and of course we hit all kinds of Friday night traffic as we approached Lincoln Center. All the while, Julie's contractions were getting stronger and stronger and closer and closer together. Come on taxi driver and traffic! Finally after about 25 minutes of a ride that took me 7 minutes the next day when I took a different route back to the hospital from my apartment - we made it.

All four of us (me, Julie, Doula, and mom) raced into the hospital and up to the 12th floor. Julie had a big contraction right as we walked in the door and another in the elevator. On the way to the hospital, we learned that the room we were going to be in at the Birthing Center (one floor below Labor and Delivery) was still being cleaned so we would have to go to Triage on the Labor and Delivery floor first. So we headed there and met the midwife. She said she would need to monitor the heartbeat of the baby in Triage for about 20 minutes then we would head down to the Birthing Center on the floor below for delivery. I went into Triage with Julie while mom and our Doula waited in the waiting room. Here is where it got fun. This was about 7:50ish by this point. While in Triage (a room full of three to four areas that were separated by curtains with a gurney inside) you could hear one other lady in there in pretty serious labor (lots of screaming/moaning) so I tried to distract Julie from that. The midwife checked and Julie was at an 8. The midwife told me she was going to go put her scrubs on quickly (she came straight in from home to meet us at the hospital) after she got the heartbeat monitor on Julie for the baby. So, while she was gone - Julie's contractions started getting really big and at one point Julie said she felt like she needed to push! There was no one else in the room now and I was like "whoa, what in the world am I supposed to do"? I did my best to comfort Julie and talk her through the contractions - but on the inside I was thinking "Where in the world is the midwife? How long does it take to put on scrubs"?! When Julie said she wanted to push I kind of yelled out the midwife's name but nothing! After what seemed like forever (probably wasn't really that long) the midwife came back in. She checked Julie again and she was fully dilated! The midwife was checking on the availability of the room in the Birthing Center but finally just said "get me a room on this floor, this baby is coming...we don't have time".

So they wheeled her out of Triage and down the hall to a delivery room and transferred her onto the bed. I ran back to get Mom and the doula who were still waiting outside the Triage room. I told them we were having the baby here - no time to go down to the Birthing Center. They jumped up and came down and joined us in the delivery room! Baby was coming!!! The time was now 8:16. The midwife was awesome. She stayed so calm and helped Julie through everything so well. Our Doula was amazing too as she and I both tried our best to help Julie through big time contractions. The baby's heart rate was slowing a bit with each contraction, then it would go back up. But ultimately the midwife knew we needed to get the baby out soon. She really encouraged Julie to make it happen. Julie was totally amazing. She was in a lot of pain - I can't even imagine but she was just awesome. Before I knew it the baby's head started to crown. I will spare you all the details, but within a few minutes this little guy made his grand entrance into the world! Wow that was a crazy hour!! What was the gender!? While they were clipping the chord to get him over to the warming table, baby's legs were crossed and I couldn't see to announce the sex. Finally after about 10 seconds of angling for the best position to see - I looked at Julie and said - "it's a boy!" Some of the best words I ever said. At 8:27, 11 minutes after we got into the delivery room, and roughly 45 minutes after we got to the hospital and an hour and 15 minutes since we left our house...our little boy was born!! It was such an incredible rush of adrenaline, emotion, joy, craziness and such a spiritual experience all at the same time.

We now have two kids! Whoa! Both of them have pretty spectacular birth stories to say the least. I have no idea what to expect with our next baby. I am sure Julie has a lot to add to this but she is zonked out after a couple of long long nights at the hospital. We were supposed to be able to be in the birth center where we would have a nice big room with a queen sized bed, no rules about visiting hours and a super relaxed environment where we could go home the next day. But since we didn't make it down to the Birth Center due to the haste of this boy's arrival - Julie had to recover in a shared room with a roommate who had a little baby that was good at crying - and they wouldn't allow me to stay overnight. Lame. But in retrospect it was such an awesome New York experience: from the taxi ride through traffic, to the crazy birth experience, to the shared recovery room and all that went along with all of that. Not sure Julie can look back at it and feel that way quite yet, but she says she will...eventually when she is caught up on sleep in 6 months. It was amazing to look out the windows there on the labor and delivery floor and from the rooms to see the cityscape of New York. Dean is a city boy. I think he will love the city as much as I do. We love this little guy so much and can't wait for you to meet him. Thanks for all your love, support, and prayers. And oh yeah - Julie is totally amazing. She is now mama to two amazing kids and she got them both here safe and sound through some pretty tough birth experiences. You rock Jules.
what’s in the name?
Dean Eyre (Grandpa Dean) was my dad’s dad. Dean passed away at age 39 after a battle with cancer when my dad was just 15. Even though I never met Grandpa Dean, I have always felt a closeness to him. He was an incredible man who did so many amazing things during his life here on earth (more on him in a later post). Any time my dad tells a story about Grandpa Dean, there is a spark in his eye and an overwhelming feeling of love and admiration. I know how much my dad looked up to him and I know Dean was loved by all those around him. Our baby Dean is lucky to be named after such an incredible man. I think Grandpa Dean and Grandma Ruthy are smiling down on him and will probably pull a few strings up in heaven to make sure our Dean is watched over and happy during his life.

Haslam is Julie’s maiden name. There are so many incredible people in Julie’s immediate and extended family that carry the Haslam name. We are so grateful for the Haslams and that Dean gets to be a part of their great family.

Here are a few more photos from the hospital, Zara meeting her baby brother for the first time, some of the great visitors that came to the hospital, and Zara welcoming baby Dean home. I have to say that one of my favorite moments as a father to this point was bringing Zara into the hospital room to meet Dean for the first time. She was SO excited and SO happy first to just look at him for a few seconds, and then to hold him in her lap. She seriously love that. You can see the look on her face in the photos below. I am so lucky to be the dad of these two. 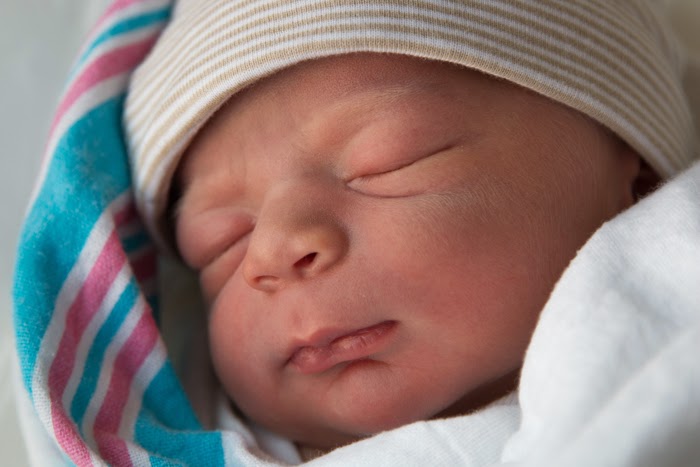 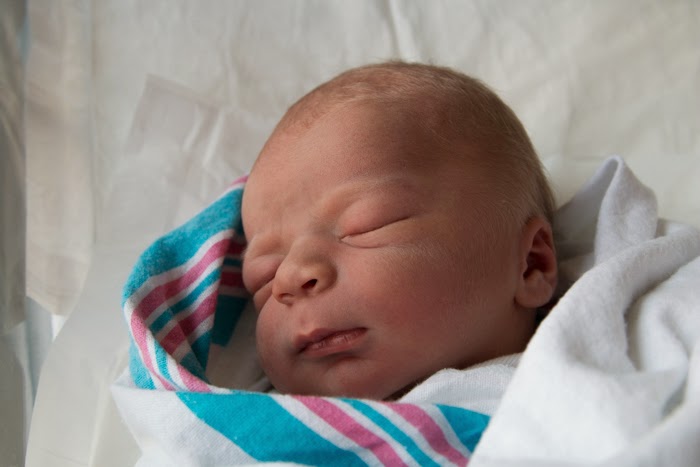 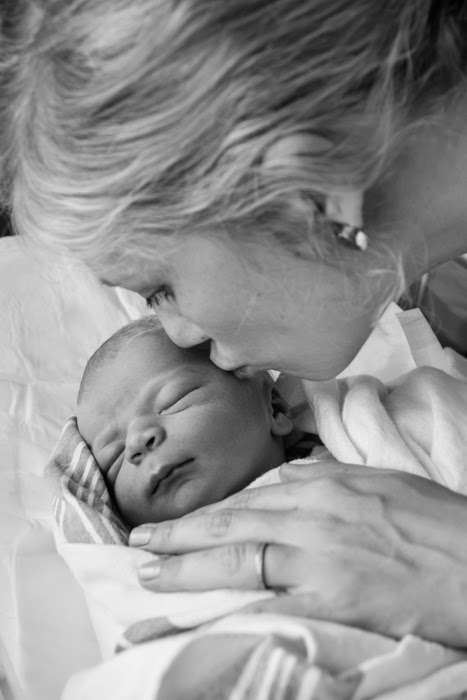 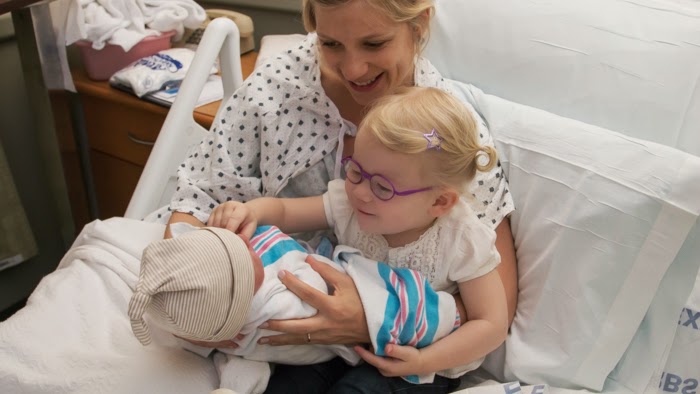 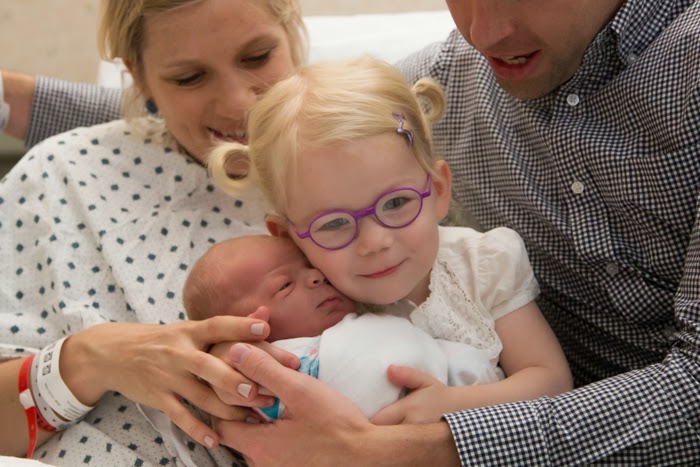 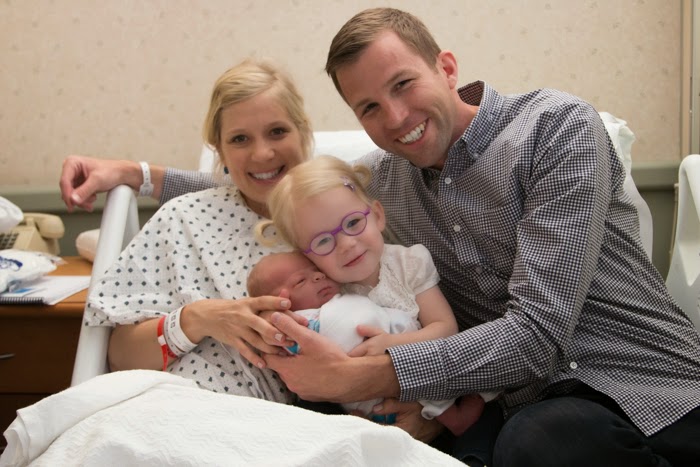 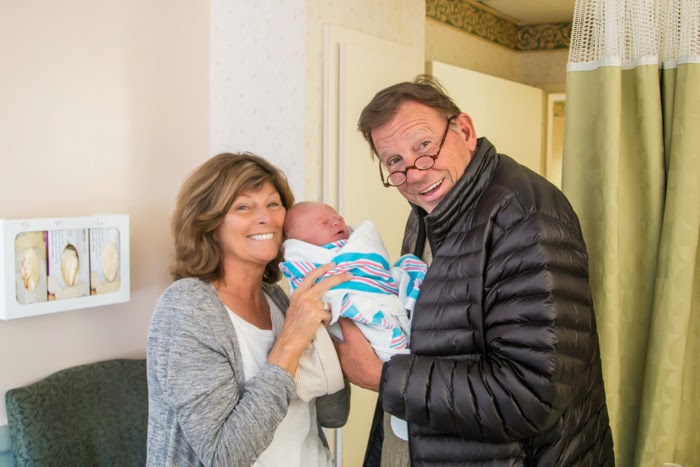 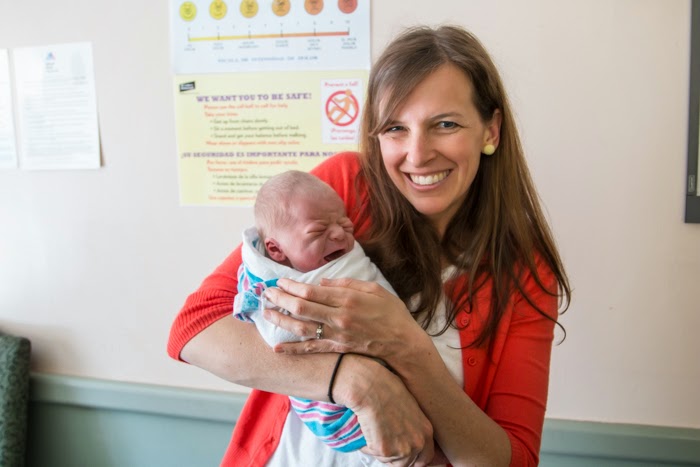 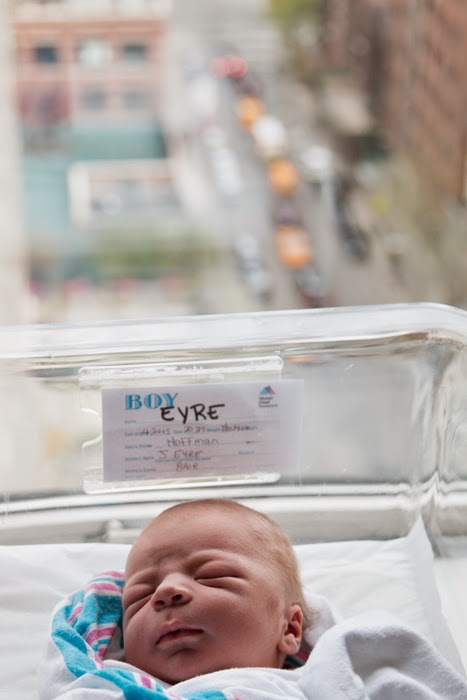 I'll finish with this one below from when we first brought Dean home. Zara is really good at kisses. I like the look on Dean's face. Insert caption here :) 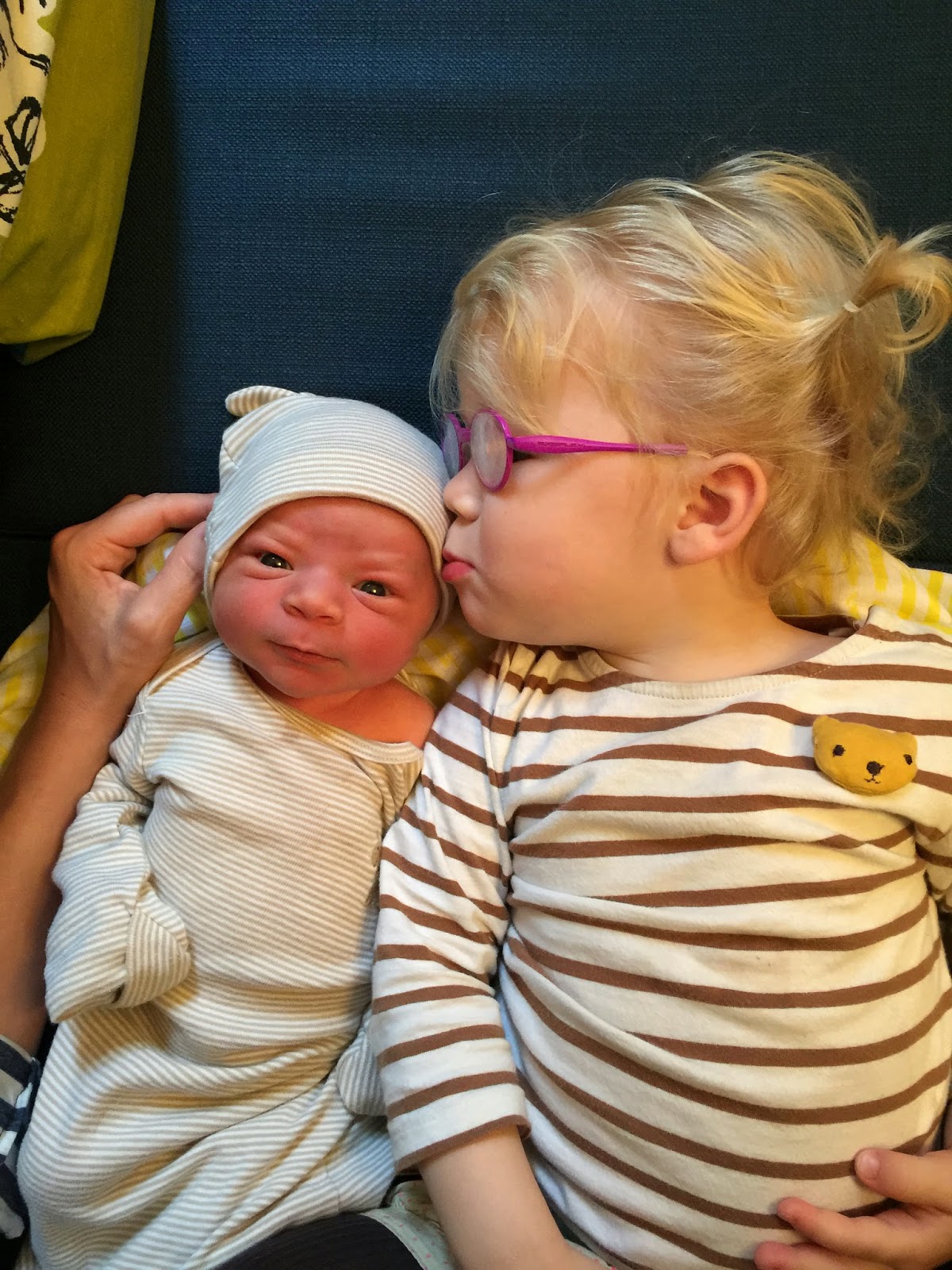